The road, engulfed in darkness, hinted at the hidden valleys, hills and turns in the pavement in the glow of our headlights. Without a moon, our path was lined with a black forest on either side of us with only the dotting of the stars above in the blackness of the night.  The unforeseen bends and lifts in the road bound us to a slow speed, ensuring our safe return to our campground deep within the woods.  We had spent a full day shopping in Moncton, New Brunswick and we were all eager to return to our cots and tent and hit the hay. 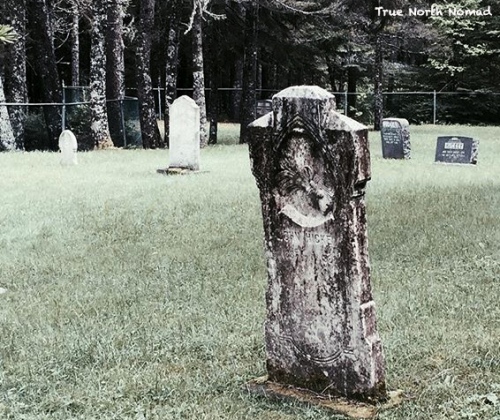 With weary, tired eyes we all sat in silence with only the radio softly filling the space between us.  My chair leaned back allowed me to view the stars above while Jack sprawled across the backseat was beginning to drift off.  Q with heavy eyes drove cautiously, determined to get us back to our site safely.  As the car crested a small hill and turned another bend “something” caught his attention.  “What is that?”  His question broke the night air and drew mine and Jack’s attention to the front windshield.  A dark, large mass lay sprawled on the roadway ahead.  In the darkness and distance we struggled to identify the object in the middle of the road.

Our headlights, alerting the object to our presence, prompted it to move.  Acknowledging that it must be alive Q began to slow the car.  The “creature” appeared to be crouching and as the lights of our car touched its back it began to pivot towards us as we hesitantly crept forward.  My mind flooded with the possibilities of what this may be in front of us.  A predatory animal or bird that had caught a meal and we were interrupting its dinner was the obvious conclusion.

As the creature turned towards, like a vampire protecting its identity it raised the arm closest to us blocking the lower half of its face.  The presumed arm was long and bony and looked as though it was cloaked, as did the head and body.  This “cloak” was pitch black absorbing the car’s light and subsequent reflection, determined not to reveal any details in the blackness.  If the creature had hair, fur or feathers they were not visible.  Its upper face void of any other discernible features except its eye area glowed in the light.  A shadow cast from its large brow bone darkened the creature’s deep-set eyes extending the shadows to its temple area.  A circle, illuminated yellow in each shadow of the eye socket was the only indication it was now watching us. I could feel the hairs on my arm stand to full attention as my fight or flight reflex engaged.

When it was almost fully facing us the creature paused and like a human extending their legs from a crouching stance to a standing position, it began to rise.  Its movement was methodical, its ascent without haste or fear.  As the height of the creature grew so did our concern for our safety when it became apparent it had cleared the height of the hood of our car.  Unnerved, Q brought the car to a stop.

If encountering this unknown entity in the pitch darkness of night did not give us reason to pause, its sinister gaze warned us to come no closer.  It stared us down for what seemed like minutes but could not have been more than a few seconds before it suddenly lifted into the air out of the brightness of our lights.  There was no motion of an implied jump.  No arm movements were seen indicating wings pushing down to lift off were evident.  It simply disappeared.  The trajectory of its climb seemed odd as it almost launched itself up and backward from the direction it was facing.  A “typical” flight path would have whatever it was coming towards us in the air not away from us and not without turning its face back around before or during take off.

With it out of sight Q began to accelerate cautiously approaching the area of the road it had been.  No eyes were visible from the side of the road or tops of the trees.  No objects could be seen in the air above where this creature had risen.  There was no kill on the road or any sign anything had ever been present.  There was no evidence of anything.

We all sat in silence with still only the radio whispering.  Questioning our belief system we struggled to tag this seemingly unearthly spirit.  With no words spoken between us and only the collective terror permeating our breath, each of us searched for something benign and familiar we could speak out loud to the other two.  Finally, Q found a benevolent form he could release from his lips.  “Maybe it was an owl?” he choked.  “Maybe,” Jack and I chimed in unison.  Although we all had the same eery feeling that what we had witnessed was a cursed abomination, none of us dare speak the truth as we were about to sleep in this forest with no more protection than canvassed walls around us.  “It must have been an owl” we repeated over and over in spoken word and within our heads, trying to prevent ourselves from fleeing back to the city.

The next morning in the safety of the morning light, we all agreed it looked nothing like an owl and more like a demon!  We returned to the approximate location of where the incident occurred and found no evidence of any kind of what it may have been or what it may have been doing in the middle of the road.  There were no tracks, fibres, nests – nothing of any kind.  The only unsettling find was a century old cemetery hidden from the road by a veil of trees.

Once back at home at the end of our trip I began researching what birds of prey called this area of New Brunswick their home.  And although I did find some rather large owls, none were as large as the creature we had seen nor were their facial features similar or would have lit up in shadow in the same fashion.  What was further distressing was that no bird we had read about could have taken the unnatural flight path we had witnessed.

It was during this research that I came across a North American Native folklore which spoke of a mythical beast called a Wendigo.  Stories that had been told for centuries by the Atlantic Algonquins and Inuit spoke of an evil spirit with an insatiable hunger for human flesh.  These creatures, as the legend goes, lived deep within the woods hiding among the shadows. Their presence is only known by the yellow glow of their eyes as witnessed by those who were fortunate enough to live to tell their tale.

Was this a Wendigo from a North America legend I cannot say for sure.  What I can say is this.  As humans we have a sixth sense that alerts us to danger.  We feel it in the hairs that stand up on the back of our necks and within the pit of our stomach that urges us to run.  Without a true identity we will never truly know what we met face to face in the woods that summer day but all three of us agreed we felt our safety was in jeopardy.

And although we could provide no proof of our encounter, the incident has left us with a good story to tell for years to come and a good reason to stop camping in a tent in the wilderness of the East.  Happy Halloween.

Have you ever had an encounter you couldn’t explain?  Does it still send shivers down your spine?  Tell us about your creepy story in the comments below.

“When there is no room left in hell, the dead will walk the earth” – enter your email address and click “follow” bottom right and never miss an impassioned tale again!

18 thoughts on “Creature In The Darkness”